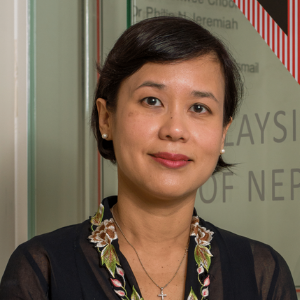 Dr.Sunita Bavanandan graduated from the University of Queensland Australia in December 1991. She obtained her qualifications as a Member of the Royal College of Physicians United Kingdom in 1997 and became a Fellow of the Royal College of Physicians Edinburgh in 2007. From 2003-2004 she obtained further training at the Leicester General Hospital, United Kingdom. Special interests are in Chronic Kidney Disease, Hypertension, Diabetic Kidney Disease, and Peritoneal Dialysis.

She contributes as an editor/author for chapters in the Malaysian Dialysis & Transplant Registry and the Malaysian Registry of Renal Biopsy. She is a Member of the Southeast Asia Glomerulonephritis Network and is involved in setting up the regional Southeast Asian PD registry (PROMISE). She is the current President of the Malaysian Society of Nephrology and is the Head of the Department of Nephrology, Hospital Kuala Lumpur, Malaysia.