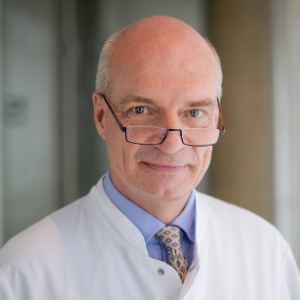 Markus Ketteler is Professor of Medicine and Chief of the Department of General Internal Medicine and Nephrology at the Robert-Bosch Krankenhaus in Stuttgart, Germany. Professor Ketteler’s main research interests include the pathological mechanisms involved in extraosseous calcifications, phosphate and vitamin D metabolism in chronic kidney disease-mineral and bone disorder (CKD-MBD), and he has served as principal investigator in several clinical multicentre trials in the CKD-MBD field. He has served as a council member and Chair of the administrative office of the European Renal Association – European Dialysis and Transplant Association (ERA-EDTA) between 2009 and 2018, and he was elected to represent the ERA-EDTA on the board of directors of the Kidney Health Initiative 2017–2019. Professor Ketteler was also a member of the Kidney Disease: Improving Global Outcomes (KDIGO) CKD-MBD Guideline Working Group 2006–2009, was appointed as Co-chair for the KDIGO CKD-MBD Guideline Update 2015–2017 and served as Co-chair of the KDIGO Controversies Conference on CKD-MBD in 2013. For the period of 2020 – 2022, he was elected as a member of the KDIGO Executive Committee. He also co-led the German Calciphylaxis Registry and is a current Theme Editor and editorial board member of Nephrology Dialysis Transplantation. Professor Ketteler has authored more than 200 peer-reviewed publications.